What Are The Steps For Laying The Subsea Pipe On The Seabed?

Take the most common S-shaped pipe laying operation as an example to introduce in detail how the submarine pipeline is built.

(2) Submarine pipe welding operations. The sea pipes need to be welded together one by one and then lowered to the bottom of the sea. The welding process is critical: transported to the processing workshop through the rollers, and then beveled, degaused at the pipe end, preheated the pipe section, welded paired, various welding (bottom welding, filling welding, internal welding, cap welding), non-destructive Flaw detection, sand blasting, coating sealing, foaming and other dozen processes.

(3) The sea pipe enters the water. The pipe laying ship moves forward, and the sea pipe enters the water. After the pipe end of the submarine pipe reaches the mud point, it is laid while welding and enters the normal pipe laying operation stage. When the pipe laying process encounters bad weather, or other unexpected conditions affect the normal operation of the laying of the sea pipe, it is necessary to temporarily abandon the pipe. When discarding the pipe, the temporary discarding pipe head shall be welded and connected by A/R winch steel wire.

(4) End the operation of laying the pipe section. When the submarine pipeline is laid near the riser installation position, the laying operation is ended, which is the same as the pipe discarding operation. 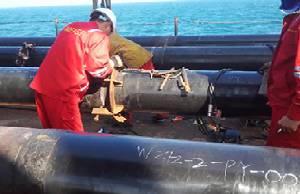 (5) Connection of riser and expansion bend. The operation of the submarine tiling section is completed. At this time, the distance between the submarine pipeline and the riser needs to be measured underwater to customize the expansion elbow. The expansion elbow adopts flange connection. Shallow water areas can be manually dived for subsequent connection work. When the water depth is greater than 50 meters, saturated diving operations are used.

(6) Pressure test and drainage of pigging of submarine pipelines. After all pipeline connections are completed, pigging and pressure testing are required. The pigging operation is to clean the inner wall of the pipe and measure whether the pipeline has buckling deformation. A commonly used instrument is a pig. The test pressure generally needs to exceed the design pressure to test whether the underwater connection point is leaking, and then the submarine pipe is drained or dried.

(7) Protection and fixing of submarine pipes. After the submarine pipe sinks to the bottom of the sea, waves, currents and anchoring of nearby ships will endanger the safety of the submarine pipe. The most serious impact is fishery activities. The anchoring of fishing vessels and the destruction of flange connection points by fishing nets, etc., so certain protective measures are required. : ① For the flat pipe section, a trencher can be used for trenching and burying. The method is to lower the trencher to the bottom of the sea, ride on the sea pipe, lift the sea pipe, and start digging a trench, like a plough for farming, with a depth of 1 to 2 meters, and then bury it for backfill. ②Adopt protective measures such as cement cushion and fixed pressure block. Cement pads, fixed blocks, etc. are expensive to manufacture and lay, so they are only used at the joints of risers and expansion bends.

Pipeline repair. Even if the protection is complete, it is difficult to completely prevent the occurrence of blockage, leakage and failure of the sea pipe. Once the sea pipe is blocked, the pig can be used for pigging operations. For the pipeline section where corrosion, leakage or pigging ball cannot be dredged, take the damaged sea pipeline and replace the connection. For areas with shallow water depth, you can salvage it and re-weld it. In areas with deeper seawater, ROV underwater operation is used to cut off the sea pipe and use mechanical connections such as flanges and clamps. At this point, the laying of a complete submarine pipeline was successfully completed.

Previous: How Can We Ensure The Smooth Operation Of Submarine Pipelines?

Next: Exploring The History Of Laying Submarine Cables All Over The World