Undersea Telecom Cables May Do Double-duty As Earthquake Detectors

As you might imagine, installing seismic sensors on the ocean floor isn't an easy task. Recently, however, scientists were able to detect seabed seismic activity using something that was already down there – a fiber optic telecommunications cable. 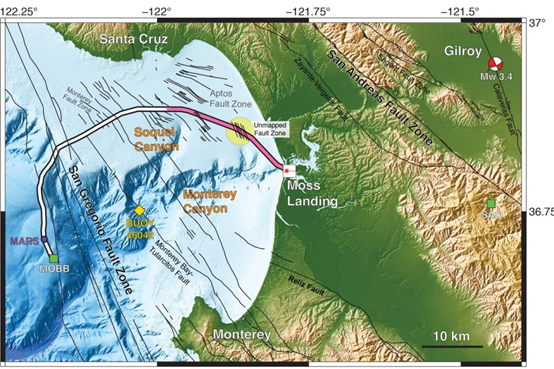 The project involved researchers from the University of California-Berkeley, the Lawrence Berkeley National Laboratory, the Monterey Bay Aquarium Research Institute, and Texas-based Rice University. Over a four-day period, they utilized approximately 20 km (12 miles) of a 52-km (32-mile) cable that had been laid in 2009 along the bottom of California's Monterey Bay. That cable connects an oceanographic-data-gathering "science node" to a lab at the Aquarium.

A photonic device was used to first send short pulses of laser light down the cable, and then detect the backscattering of that light, which was created by strain

in the cable that was caused by stretching. It was possible to measure that backscatter once every 2 meters (6.6 ft), essentially turning the 20 kilometers of cable into 10,000 separate sensors. The science node at the end of the cable wasn't involved in the process, which is known as Distributed Acoustic Sensing.

The scientists were thus able to detect a magnitude 3.4 earthquake that occurred 45 km (28 miles) inland near the city of Gilroy, California, plus they accurately detected both "steady-state" and storm waves on the surface. Additionally, the technology allowed them to map previously unmapped submarine fault zones within the San Gregorio Fault system.

Sources: UC Berkeley, American Association for the Advancement of Science

Next: TIMEAST's Submarine And Optical Cable Inspection And Repair Equipment