How Was The World's First Submarine Cable Laid?

Let's follow the Submarine Pipeline Repairing Service Provider to understand the world's first Submarine Pipeline Laying. The advent of ancient gum in the 19th century made the concept of telegraph cables crossing the ocean ready to become a reality. The metal wires wrapped in Guta glue can be laid on the bottom of the sea, and the current can flow freely in it without being dissipated by the sea water. Engineer John Watkins Brett laid the first submarine cable in the English Channel, but a fisherman mistakenly thought he had found a big fish and pulled the cable out of the sea. In 1851, Brett carried out the second laying and finally succeeded. The United Kingdom and Continental Europe were successfully connected together.

In 1854, British engineer Gisborner was responsible for laying the submarine cable from New York to Newfoundland, but there was a problem with the project funds, so he went to New York to seek the help of investors. There, he met the American billionaire Cyrus Westfield. Field is very young, but very wealthy, with a smooth career and a strong adventurous spirit. Although he does not know any professional skills, but similar to today's investors, he keenly looks at the more distant future. After investing in the New York-Newfoundland submarine cable, he immediately devoted himself to the grand project of the trans-Atlantic submarine cable.

Field promotes this cause with incredible enthusiasm and energy. He quickly established contacts with industry experts, government, and the financial community, and followed up step by step in technology, law, and investment. In the UK, an investment of £ 350,000 was raised in just a few days, including cultural celebrities like Mrs. Byron. Everyone is full of confidence in the future and firmly believes that the development of technology will make their investment pay off. Transoceanic Cable was Microsoft, Google and Apple of that era, and Field was Gates, Page and Jobs of that era.

Technically speaking, the Trans-Strait Cable and Trans-Atlantic Cable are completely different. Laying the English Channel cable, a calm day is enough. When crossing the Atlantic Ocean, the steamship at that time was sailing for more than three weeks. Not counting the laying machinery, the weight of the entire transoceanic cable alone far exceeded the load capacity of any ship at that time. The British government provided Field with one of the Royal Navy ’s largest warships, the HMS Agamemnon, while the US government provided the 5,000-ton displacement USS Niagara. The two ships of the largest tonnage class at that time were specially modified to fit half of the transoceanic cables.

The transoceanic cable located on the seabed must be very strong and cannot be broken, but at the same time, it must be very soft, otherwise it will be difficult to lay. On the other hand, its process must be very precise, otherwise, a little flaw may cause instability and interruption of the electrical signal. Several factories produce such submarine cables day and night. The great project of Field ’s transoceanic cable was the headline of newspapers all over the world at that time.

On August 5, 1857, Field's laying fleet set sail from Ireland, and industry experts, including Morse, were on board to monitor the laying situation in real time. The "Niagara" was like a spider spitting a thread, moving slowly and carefully forward, while leaving the transoceanic cable behind with a winch. One end of the cable is fixed in Ireland, and the experts on board keep in touch with the Irish land to ensure that the cable is not broken. 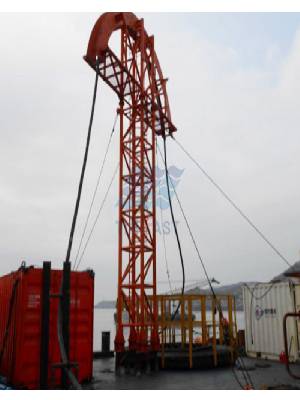 On the evening of August 11, after successfully laying 355 nautical miles, the accident occurred. The winch failed, and the cable that had been laid fell into the sea like a broken kite. At that time, there was no suitable diving technique, and it was impossible to pull the thread that fell into the seabed back. The first attempt failed. Field lost 355 nautical miles of cable plus an investment of £ 100,000. Due to the climate of the Atlantic Ocean, the second attempt can only wait until the calm of the second summer.

On June 10, 1858, Field's fleet set off for the second time. The fleet plans to first sail to the center of the Atlantic Ocean, connect the two halves of the cable, and then separate the troops into two directions, laying them in both directions in Europe and North America. As a result, the fleet encountered a storm before reaching the predetermined joint location in the middle of the ocean. The "Agamemnon" is loaded with huge cables, and due to the need for laying, the weight distribution of the hull is very uneven. "Agamemnon" was on the verge of extinction in the storm deep in the ocean. Everyone has begun to consider throwing the cable into the sea in order to save their lives. But the captain refused. Fortunately, "Agamemnon" escaped a disaster, escaped to death, and successfully reached the intended location. It is a pity that after the turbulence of this storm, a large number of cables were collided and hanged and severely damaged. After laying more than 200 nautical miles, the two ends of the cable could no longer communicate with each other. The more than 200 nautical miles of cable became scrap iron, and the second attempt failed again.

This failure shook the confidence of the vast majority of investors. Many people asked Field to sell the remaining cables to make up for their losses. The media at that time was also in an uproar, with voices of doubt everywhere. But Field was unimpressed and must try again.

On July 17, 1858, the fleet set sail quietly again. This time, there were no media reports or celebrities. Field and his career have been forgotten all over the world. On July 28, "Agamemnon" and "Niagara" succeeded in joining in the middle of the Atlantic Ocean and began the laying of transoceanic cables. Half of the cables on the two ships were docked together, and then "Niagara" sailed to the United States, and "Agamemnon" sailed to the United Kingdom. Everyone slogans said goodbye to each other, and only this small cable connected them. On August 5, "Niagara" reached the coast of Newfoundland, and "Agamemnon" reached the Irish coast on the same day. There are no flowers and crowds on the coast, but this great cause has been completed.

A few hours later, the world was full of joy, and people all over the world were waiting excitedly for this moment. On August 16, 1858, Queen Victoria ’s congratulatory message to US President Buchanan was sent to North America via a submarine cable. At this moment, the "Niagara" was still on its way from Newfoundland to New York. Buchanan returned the call to the Queen of England, and at the same time, the salute sounded 100 times to celebrate this great historical moment of mankind.

On August 18, Field and his team returned to New York in the "Niagara", and he was greeted by a grand city tour. Field became a national hero in peacetime. On August 31, a more solemn celebration attended by the president and people from all walks of life.

But fate is cruel. A few days later, the submarine cable was disconnected, and North America can no longer receive clear signals from Europe. Rumors spread wildly, and Field fell into a thousand fingers, and the wave of cheering used the same force to fight back against the innocent Field. Field is a scammer, the Queen ’s telegraph was fabricated by him, everything was for him to make a name for himself, and his team was his childcare ... The submarine cable that Field laid hard was once again becoming scrap iron, and He also lost his reputation and the project was forced to aground.

More than six years have passed, and Field, a steel warrior, has not been defeated by fate. In 1865, Field appeared again in London, with a new £ 600,000 investment to restart his trans-ocean cable project. At this time, the research on the cable telegraph is very mature. And the world's first giant ship "Great Eastern" designed and built by the famous engineer Isambard Kingdom Brunel has also been built, and it just happens to be idle. With the new telegraph technology and this huge ship with a displacement of 22,000 tons, the previously extremely difficult things became much simpler. On July 23, the "Great Oriental" sailed, and began another attempt by Field. But the cable suddenly broke while still two days away from North America, and this fourth attempt failed again.

On July 13, 1866, the "Great Oriental" set off again and finally succeeded. Soon, the cable that failed last time was successfully found, and continued to be laid successfully. Two cables connect Europe and North America closely. From the perspective of the Internet and the Global Village, this seems to be taken for granted, but at the time, this was the miracle of the times.

Get to know here today, please contact us for the installation of China Subsea Pipeline Installation!

Previous: The laying of the submarine cable from the 220 KV main island to Yushan's third loop is completed!