How Are Submarine Optical Cables Laid?

The Internet is already an indispensable part of our lives, and the submarine fiber optic cable is the "central nerve" of the Internet. It carries more than 90% of the world's international voice and data transmission. Without it, the Internet is just a local area network. It is important to know that the total length of submarine optical cables in the world is 900,000 kilometers, which can circle the earth 22 times.

Submarine optical cables are the same as terrestrial optical cables, with a core of the size of a hair wire in the middle, however, submarine optical cables need more enhanced armor protection. From the outside to the inside, it is divided into: polyethylene layer, polyester resin, stranded wire layer, aluminum waterproof layer, carbonic acid resin layer, copper pipe, paraffin, alkane layer, and finally to the optical fiber. Such multiple layers of protection are to prevent the corrosion of seawater. The outer polymer layer is to prevent the reaction of seawater and reinforced steel cables to produce hydrogen. Even if the outer layer is really corroded, the inner copper tubes, paraffin, and carbonic acid resin are also Prevents hydrogen from damaging the fiber. But no matter how well the mechanism is designed, the fiber will still be damaged. Generally speaking, the life of the cable is 25 years.

So how is the submarine optical cable laid in the deep sea? 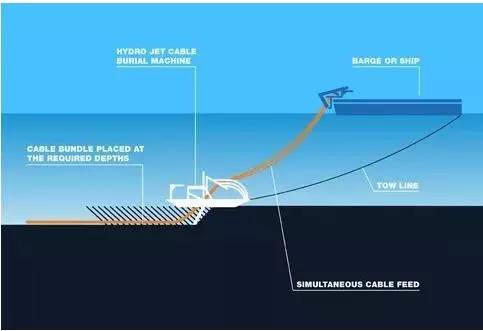 In addition, on the rugged sea floor, robots are required to constantly detect the best path to prevent the cables from being damaged by rocks.

Next: How Are Submarine Cables Laid?