How is the Submarine Cable Laid? (3)

What are the common buried methods for submarine cables?

The excavation method uses a dredger to dredge, and the depth of dredging is determined by the buried depth. After the excavation is completed, the submarine cable is directly laid down, and the soil is backfilled by using the tide. To achieve a certain depth of excavation width and depth with this construction method, the slope needs to be laid at a certain ratio, otherwise a collapse phenomenon will occur. If the buried depth of the submarine cable is 3m and the grading ratio is 1: 3 (ratio of depth to width), the excavation width will reach 9m.

Using this method for construction, if a ship encounters severe weather or an emergency situation, it will easily damage the submarine cable. 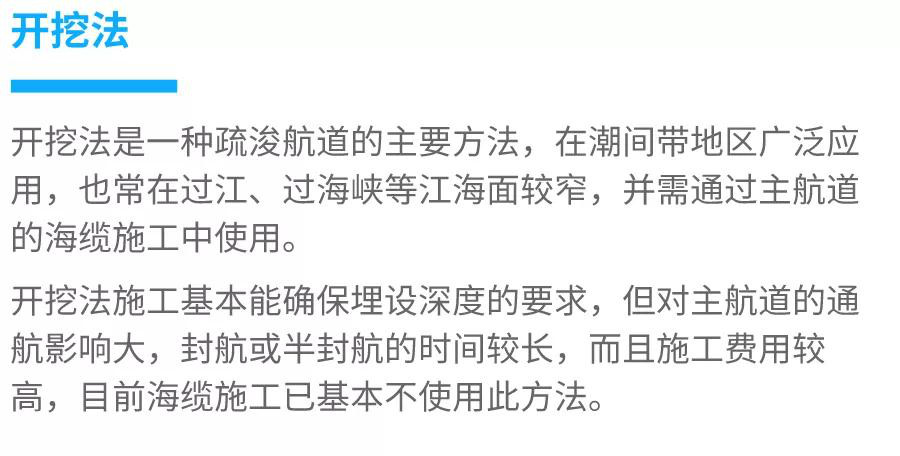 2. Brief introduction of the construction method of burrow plow:

This construction method requires a large submarine cable construction ship with large traction force. Submarine cables can be buried in other submarine substrates other than rocks. Generally, it is easier to apply on muddy soil, while the strength of sandy soil is relatively high.

During the Submarine Optical Cable Laying operation, the nozzles installed in the buried ploughing section spray high-pressure water jets to make the bottom sediment flow and form a trench, and then the submarine cable is buried at the bottom of the trench.

The main features of this construction method are: the cable can be buried at the same time as the cable, or the submarine cable that has been laid on the bottom of the sea; there is no high requirement on the tonnage and traction of the submarine cable construction ship, just provide the water spray Requires power; the towing tension is smaller than that of knife-plow burial plows, the burial depth is large, and the maximum burial depth can reach about 10m. Due to the shallow draft of the construction vessel, the working water depth can be any depth from 1.5m to 150m.

The submerged construction ship itself has no power, and it alternates the traction anchor by turns or rely on other vessels to tow. The buried plough is equipped with sensors such as burial depth indication, attitude, tension and pressure, and transmits the data to the command center to control the construction quality. 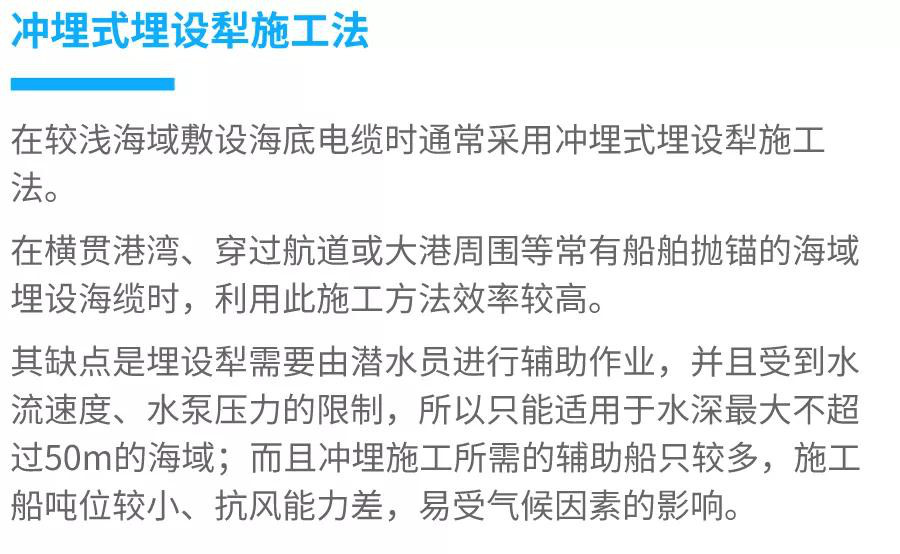 ROV is an underwater remote control vehicle, commonly known as an underwater robot. Each ROV can be equipped with two sets of burial equipment, a cable cutter, a clamp capable of lifting a 20t weight, and a 25Hz audio signal tracker.

This article briefly introduces the types of basic topological structures of current-stage wind farm collector cables. According to the actual deployment situation, factors such as cable investment, construction difficulty and reliability are comprehensively considered to optimize the design of the liaison of the current collection lines.

According to the results of sea state surveys and geological surveys, with reference to mature technologies, and applying key technical solutions that have been proposed, comprehensive design of the engineering submarine cable laying process and scheme is carried out to achieve the goals of short construction time, high safety level, and excellent construction cost.

Next: How is the Submarine Cable Laid? (2)