How Was The Submarine Oil And Gas Pipeline Built? (2)

There are many design considerations to complete a submarine pipeline, and the installation and construction is to overcome all difficulties. The first is that the operating environment is in the ocean. Not only is the operating space severely restricted, but the complex and changing sea conditions will also bring great challenges to normal construction. In addition, the seabed environment is complex, not just a flat river. It is composed of various topographic features, such as high seamounts, rolling hills, long ridges, and deep trenches. We can't transform the seabed geomorphology like laying pipelines on land, so no matter the design or construction process, the consideration of laying submarine pipelines is very complicated. The problems of low temperature, high pressure, high salinity, undercurrent surge, hydrate blockage, pipeline corrosion, and impact loss will continue to exist. The coexistence of these problems makes the laying of submarine oil and gas pipelines not only an engineering problem, but also a scientific problem.

So, how is the submarine pipeline laid? For construction operations, water depth is the biggest influencing factor, and pipe laying operations are very different depending on the water depth.

(1) In places close to the shore and in shallow water, the winch can be used to directly pull the sea pipe to the land.

(2) Pipes can be laid in the shallow sea area and far away from the shore by way of laying down and welding at the same time. S-Lay (S-type laying method) is mainly used: the submarine pipeline enters the water through the stern holding frame, forming an S-shaped curve and laying into the seabed. During the pipe laying operation, three artifacts are needed on the ship-tensioner, stinger and welding line. The tensioner is used to fix the sea pipe, like a big clip to hold the sea pipe. The custody rack is used to control the laying direction of the sea pipe. In addition, due to the limited space for offshore operations, laying a submarine pipe requires a professional fleet to cooperate with each other to complete the construction, and the cost is 1 to 2 times higher than that of the land under the same circumstances.

(3) Pipe laying operations in deep water areas increase the water depth, resulting in an exponential increase in construction difficulty. The increase in the length of the submarine pipe leads to an increase in weight, which requires the pipelaying vessel to withstand greater tension. At this time, the J-Lay method is used for construction. J-Lay (J-type laying method): The submarine pipe leaves the pipelaying vessel in a near-vertical form, and descends along the vertical bend until it is laid into the seabed. The overall pipeline is "J" shaped, suitable for hundreds of meters to thousands Meters in the deep sea area.

(4) With the continuous development of new technologies, the form of offshore pipe laying operations has been continuously improved. For submarine pipes with small diameters and slightly weaker strength, they can be manufactured on land and directly wound on drums, and then transported to the sea by pipelaying ships. This operation is called Reel-Lay (rolled pipe laying operation) . At present, the coiled pipe laying ship can be divided into two types of horizontal and vertical. For horizontal coiled pipe laying ships, the axis of rotation is perpendicular to the deck of the pipe laying ship, and S-type laying is used (usually used in shallow water), which is often used for laying umbilical cables; for vertical coil pipe laying ships, the axis of rotation and the pipe laying vessel The deck is kept level and is laid in a J-shape, which is often used in deep water. Of course, which operation method to choose in the end not only needs to consider the water depth, but also combines the comprehensive factors such as operation cycle and operation cost.

Steps for laying submarine pipes on the seabed:

Take the most common S-shaped pipe laying operation as an example to introduce in detail how the submarine pipeline is built.

(2) Submarine pipe welding operations. The sea pipes need to be welded together one by one and then lowered to the bottom of the sea. The welding process is crucial: transported to the processing workshop through the rollers, and then beveled, degaused at the pipe end, preheated the pipe section, welded paired, various welding (bottom welding, filling welding, internal welding, cap welding), nondestructive Flaw detection, sand blasting, coating and sealing, foaming and other dozen processes.

(4) End the operation of laying the pipe section. When the submarine pipeline is laid near the riser installation position, the laying operation is ended, which is the same as the abandonment operation.

(5) Connection of riser and expansion bend. The operation of the submarine flat section is completed. At this time, the distance between the submarine pipeline and the riser needs to be measured underwater to customize the expansion elbow. The expansion elbow adopts flange connection. Shallow water areas can be manually dived for subsequent connection work. When the water depth is greater than 50 meters, saturated diving operations are used. 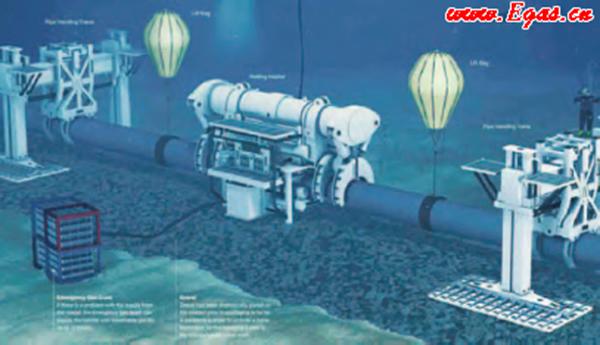 (6) Pressure test and drainage of pigging of submarine pipelines. After all pipeline connections are completed, pigging and pressure testing are required. The pigging operation is to clean the inner wall of the pipe and measure whether the pipeline has buckling deformation. A commonly used instrument is a pig. The test pressure generally needs to exceed the design pressure to test whether the underwater connection point is leaking, and then the submarine pipe is drained or dried. 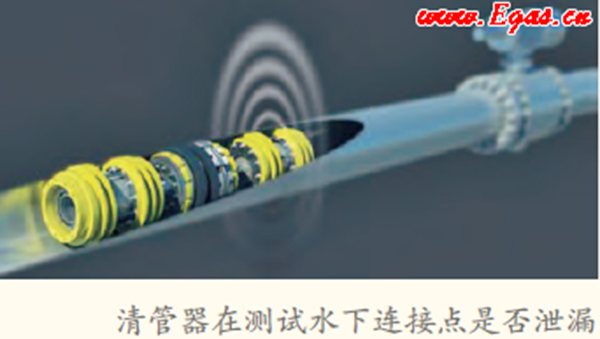 (7) Protection and fixation of submarine pipelines. After the submarine pipe sinks to the bottom of the sea, waves, currents, and anchoring of nearby ships will endanger the safety of the submarine pipe. The most serious impacts are fishery activities. The anchoring of fishing vessels, the destruction of the flange connection points by fishing nets, etc., so certain protective measures are required : ① For the flat pipe section, a trencher can be used for trenching and burying. The method is to lower the trencher to the bottom of the sea, ride on the sea pipe, lift the sea pipe, and start digging a trench, like a plough for farming, with a depth of 1 to 2 meters, and then bury it for backfill. ②Adopt protective measures such as cement pads and fixed press blocks. The cost of manufacturing and laying of cement cushion blocks and fixed pressure blocks is high, so it is only used at the joints of risers and expansion bends.

(8) Pipeline repair. Even if the protection is complete, it is difficult to completely prevent the occurrence of blockage, leakage and failure of the sea pipe. Once the sea pipe is blocked, the pig can be used for pigging operations. For the pipeline section where corrosion, leakage or pigging ball cannot be dredged by sea pipe, cut the damaged sea pipe and replace the connection. For areas with shallow water depth, you can salvage it and re-weld it. In areas with deeper seawater, ROV underwater operation is used to cut off the sea pipe and connect it with mechanical means such as flanges and clamps. At this point, the laying of a complete submarine pipeline was successfully completed. 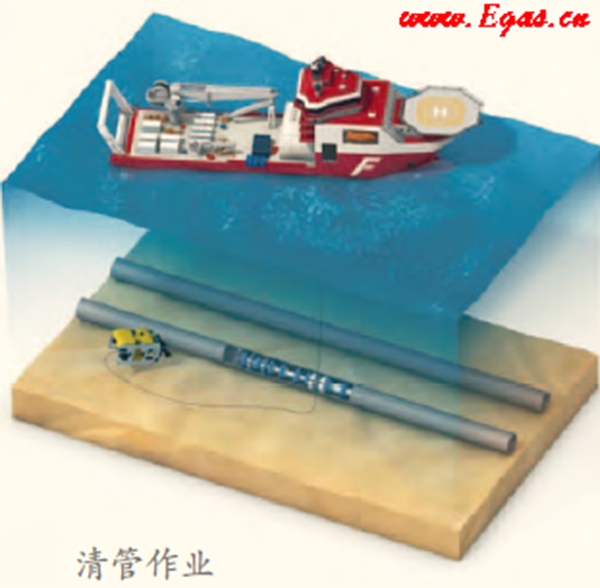 Next: Do You Understand Submarine Cables?